3 Days with a 3D Printer

tl;dr: This is a fairly long and detailed post. For my first impressions on 3D printing after a few days with a printer, scroll down to the bottom of this article.

I first learned about 3D printing a few years and found it really interesting and contemplated building a RepRap, but never got around to it. Although, I still had been itching to start 3D printing. In November, I finally caved and ordered my first 3D printer and received it a few days ago. Some things that led me to getting my printer were: it seemed like hobbyist printer technology had improved significantly; a lot more options became available; I met someone with a RepRap last summer; some of my peers in college are using commercial quality 3D printers for projects.

I thought it would be helpful to share my thoughts and experience on picking a printer, actually printing and what I have learned so far. Clearly, I’m a novice, so take this article with a grain of salt.

How I chose my printer, the MakerGear M2

There are a plethora of different hobbyist 3D printers out now. Here are some decent lists of options: list of cheap 3d printers, list of printers below $20,000. Also, Make Magazine recently put out a nice and thorough comparison of a bunch of hobbyist printers - this is probably the best 3D printer comparison at the moment: here. A lot of opinions on different 3D printers can be read on the RepRap forums, 3D Printing Subreddit, MakerBot Google Group and on other forums and blogs.

My main criteria for picking a printer were:

After countless hours of research, I narrowed my list down to the following printers:

Ultimately, I settled on the MakerGear M2. The things that I liked about this printer are that it is built upon a solid metal frame, instead of plywood which most other printers use. To me, it seems like that would help with vibration dampening and stability. The other components in the M2 appear to be high quality and the design, well thought out. MakerGear has been around for a while selling RepRap kits and parts and they have a fairly active Google group and IRC channel. The M2 prints relatively fast, has a good size build area(8” x 10” x 8”) and has a heated bed. It was priced below the Replicator2 and the same as the Afinia and Series 1 when I ordered it, $1,500 for an assembled machine.

A few days ago, after months of anticipation(I ordered my printer early in November and received it on the last day in January.), my printer finally arrived. Like a kid on Christmas morning, I was delighted and immediately grabbed my printer out of a sea of packing peanuts. It was packaged really securely - foam blocks and zip ties kept all the important components in place; it seemed really unlikely that something may have been damaged in transit. 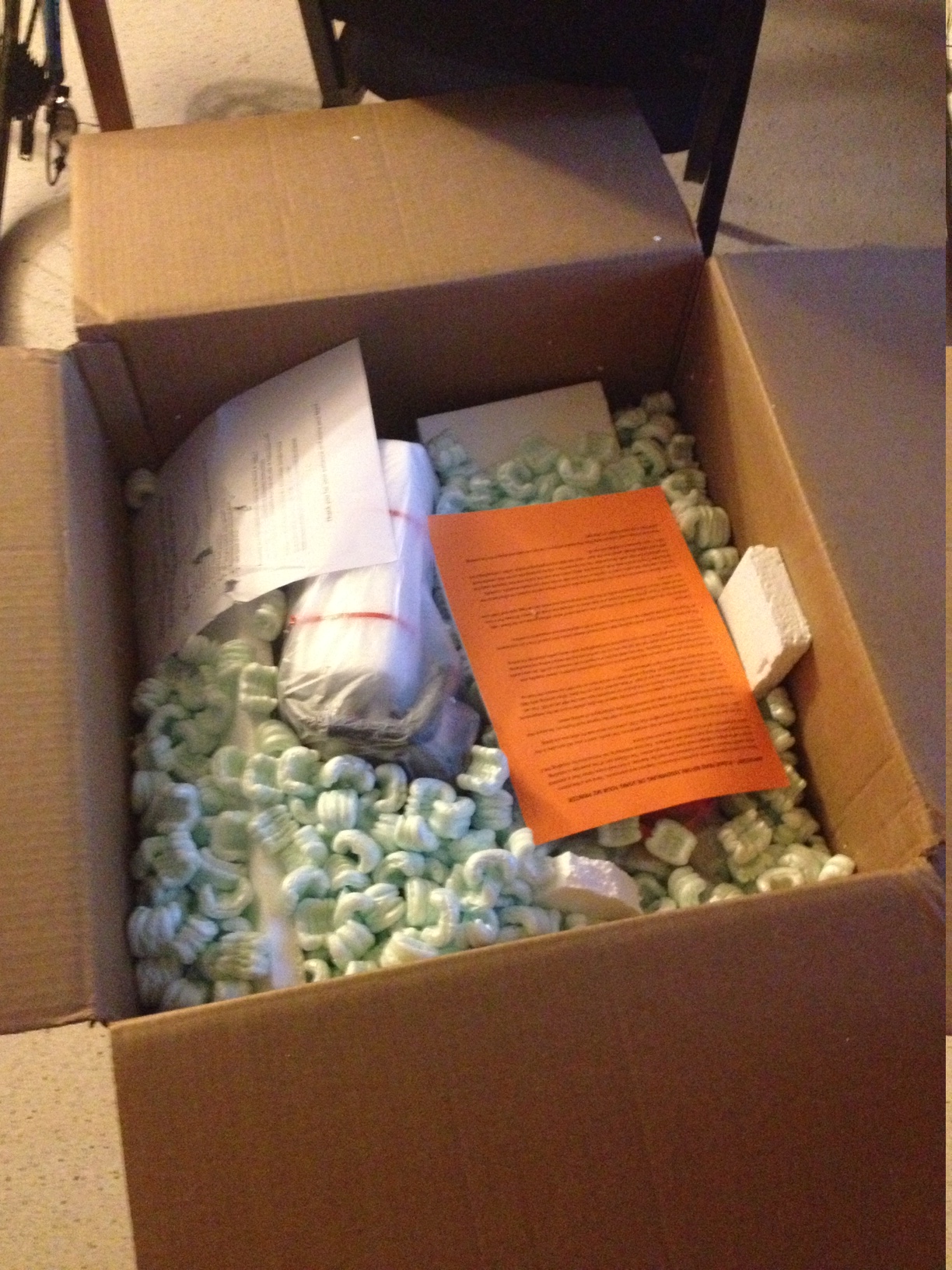 My package also included a bunch of tools, spare parts, 1kg of black PLA, some test prints that presumably came off of my printer, lubricant, a piece of chocolate- really nice touch!, kapton tape(although, I had previously ordered this, not knowing it was included), an SD card in the printer and other miscellaneous items for my printer. The documentation was pretty light: one page with basic instructions on how to print PLA and ABS - temperatures, to tape the bed or not, warnings, etc… Also included were engineering diagrams of the printer. To actually get the printer setup, all I had to do was put the filament spool on its holder, remove the packaging and plug in power and my computer via USB.

The M2 comes with an SD card loaded with a few gcode(more on this in the next section) files to print. I decided to print the one which I thought would be the quickest - a bracelet with MakerGear. I heated the bed to 60° and the extruder to 185°, per MakerGear’s instructions and started the print using Pronterface.

Less than 10 minutes later, I grabbed this off the bed: 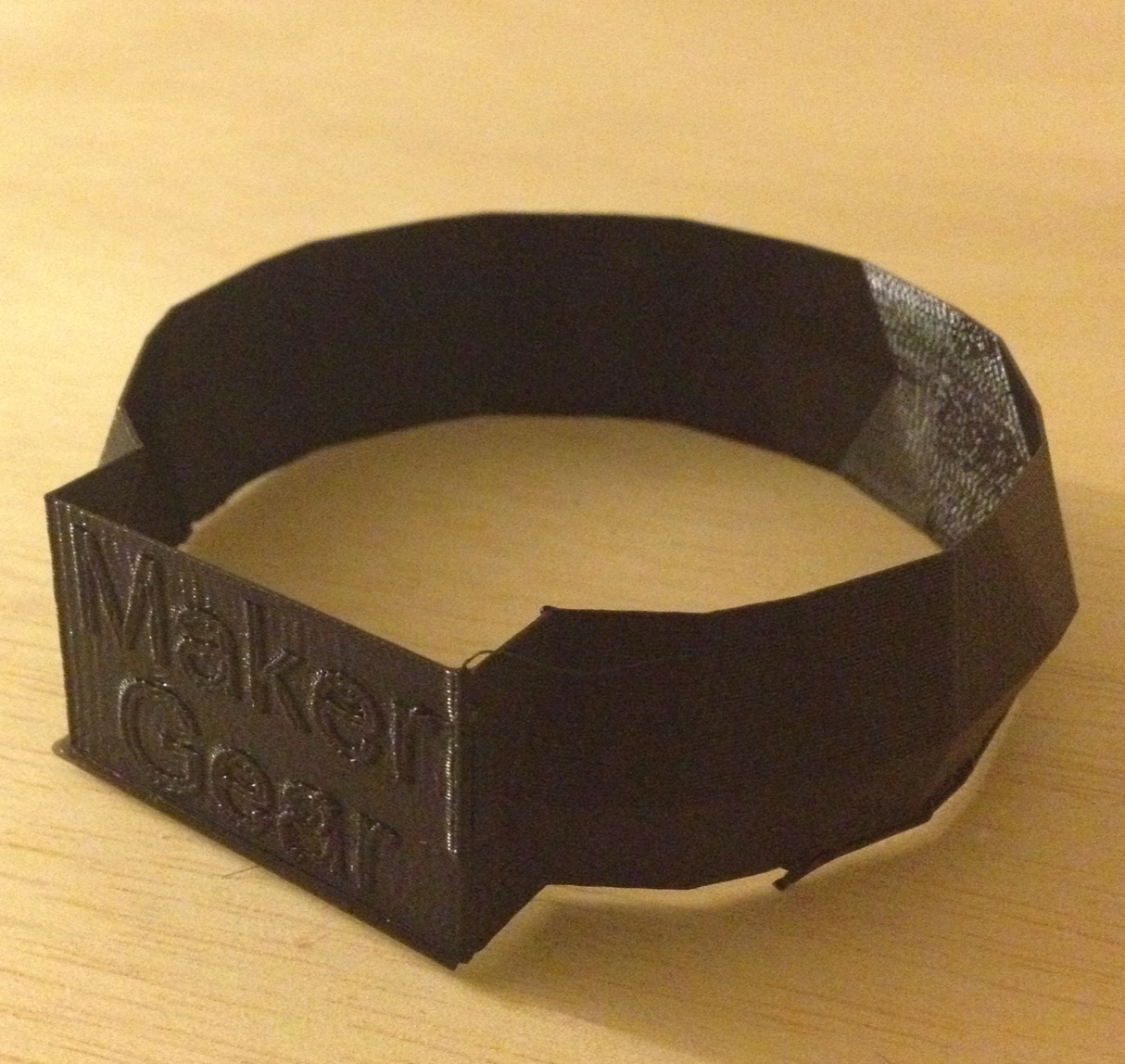 I thought it turned out really well - the surfaces are fairly straight, the text is easy to read and there are only a few tiny blemishes.

Some other things that I have printed are: a bunch of ‘calibration cubes’ with different temperatures and other settings and an iPhone case. I love the case because it is both utilitarian and shows how 3D printing is great for customization: 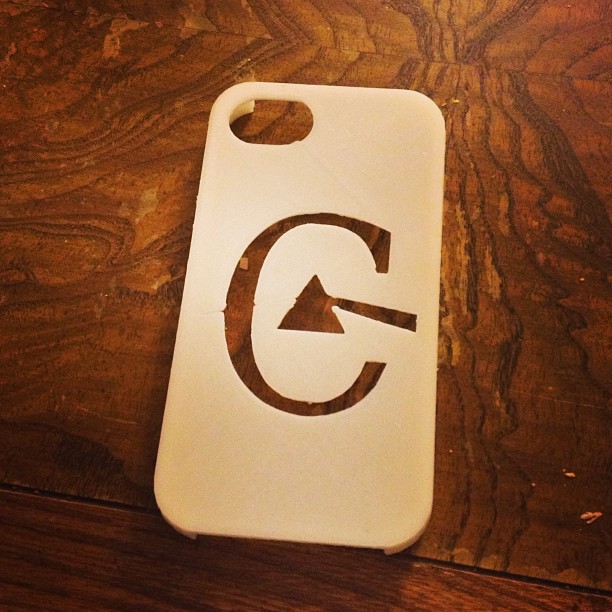 Infill detail from a simple cube, I had difficulty focusing my camera(phone), since it was so close to the object: 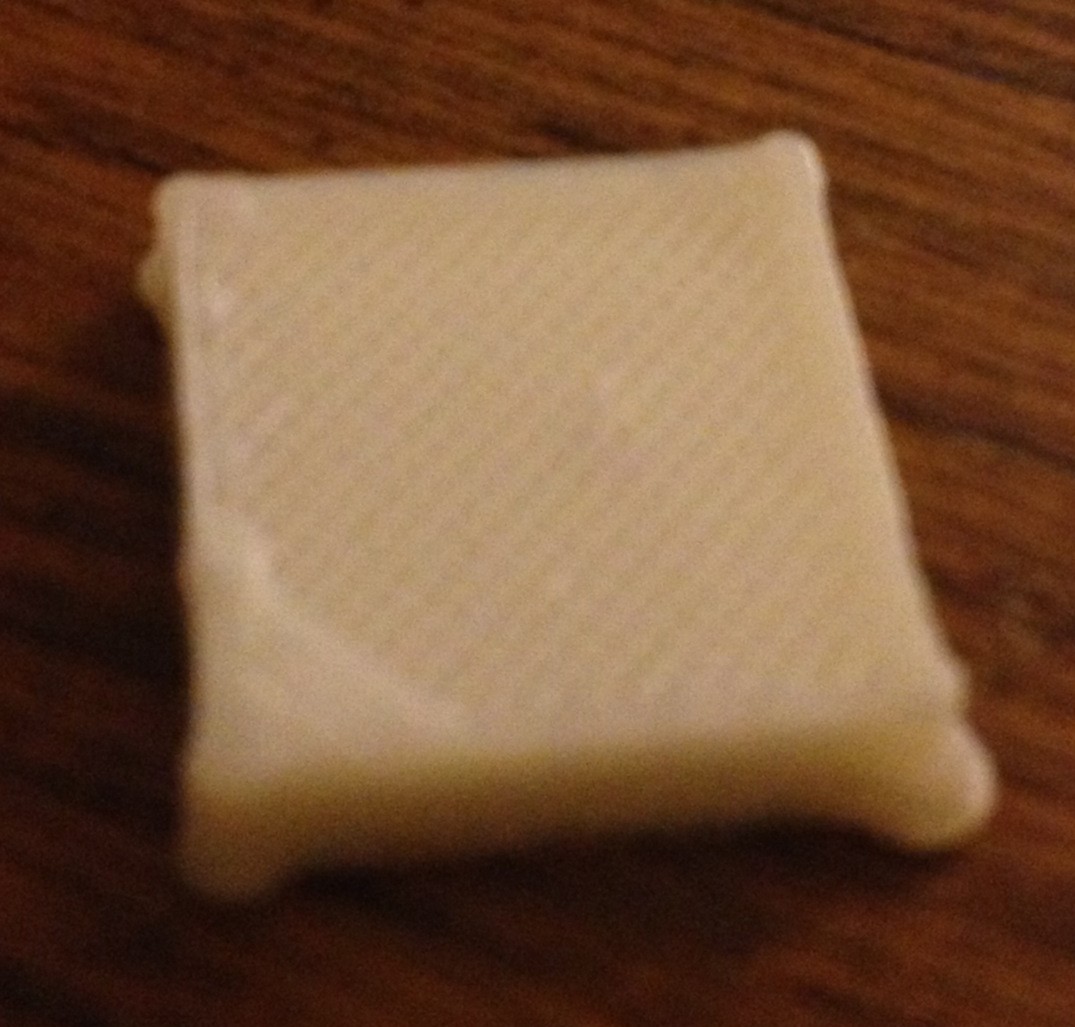 Here are some things that I’ve learned from printing after a few days or have picked up from elsewhere on the internet: